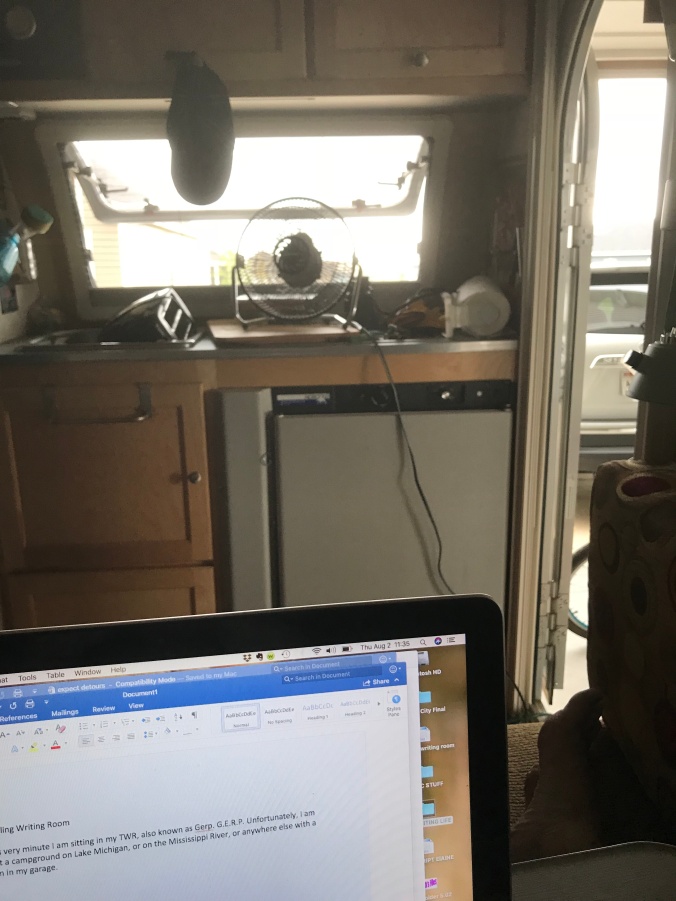 So, at this very minute I am sitting in my TWR, also known as Gerp. Remember, I tend to name things. Unfortunately, I am not out at a campground on Lake Michigan, or on the Mississippi River, or anywhere else with a view. I am in my garage. Why? Because I am not yet quite fit to travel. You see, four weeks ago I had my third knee replacement. Yeah, I’ve had three of them. I’m gifted like that. And, while I’m doing great, the New Knee isn’t quite ready to take the TWR out camping just yet.

I sit here in Gerp thinking how special I must be. Sounds a little facetious doesn’t it? But, I mean it in the best of ways. You see, since the day of my surgery, I was never left alone. For four weeks my family and some dear friends volunteered to take care of me. My daughter-in-law, Katie, set up a Google Calendar thingy and then people started giving me the dates that would work for them. FOUR WEEKS of constant care. I tried to be a good patient but a few days I think I got a little ornery. Pain does that to one. You know about the Hulk, right? The guy who is normal and nice until he smashes his thumb with a hammer and then outgrows his clothes in a nano-second, shoots up ten feet, biceps bulging, and turns lime green. Yet, he manages to keep his pants on. Those trousers must have enough spandex in them to make the world’s largest trampoline when not needed by the green man. Well, I didn’t exactly go there, but I got ornery a time or two.

Son Matthew was the one on ‘waiting room vigil’ during surgery. My daughter-in-law Sarah and my little granddaughters came later to the hospital to visit. I think I scared them a little. They had never seen their MeMe hooked up to tubes and such. Matthew was also the one who brought me home the next day. Can you believe it! My knee gets cut in half, sort of, and metal gets hammered into my bones and then the knee cap is reattached and I’m home the next day. What a world we live in!

In the beginning I needed Big Boy drugs every four hours, even in the middle of the night. Son Matthew was jolly on the spot. Sarah brought food and helped me shower. When that family left town, my friend, Kayde, came and spent the night and took over the dispensing of the Big Boy drugs. When she left, Son Nathan, came and kept me on my exercise routine and took me on my first Physical Therapy adventure. When he left, my friend Brenda came for several days and took me to PT and continued my exercise program using some creative counting skills. She also did some yard work and made tuna salad. When she left, Son Joshua showed up with three-year-old granddaughter, Tully. They cooked and also did yard work. I was using less Big Boy drugs by then, so they took me on my first field trip to Target where I got to drive one of those little buggies with a basket. I only knocked over one rack of clothes. When he left, Son Nathan returned with his whole family. Daughter-in-law, Erin, cooked while the four grands entertained me. Grandson, Cormac snuggled up and read me a thrilling novel. Captain Underpants. Anybody know it? I wept. Did I mention the Big Boy drugs? 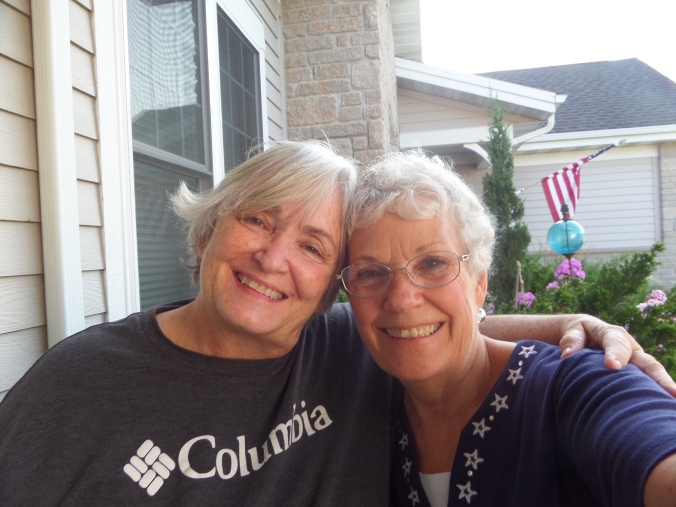 My fourth and last week of care ended this past Sunday. A friend from Missouri (I live in Wisconsin) stayed for six days. Janet fed me, took me on excursions, iced the knee regularly, pampered Atticus, the dog, cleaned my house, napped when I did and made me laugh.

See, I am special. Actually, I’m not, but I am blessed. In our country right now, it seems like the entire population is mad at each other. We are plagued with image after image of people hurting people. People hating people. People cursing people. But for four weeks when I needed people, I was encircled by the kind of folks that truly make up this country. They don’t carry signs. They don’t shake their fists. They don’t whine. They aren’t selfish. What they are, are kind, servants, helpers and Believers. They are people who practice the ministry of presence.