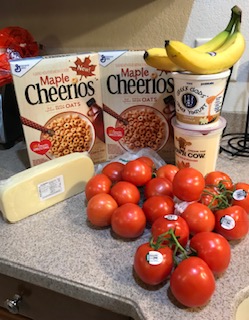 So, my adventures in online grocery shopping continue. Read my lips: that little quantity box has a purpose. This week, apparently, I ordered twenty tomatoes and a hunk of cheese the size of a boxcar. Don’t get me started on the gallon of yogurt that showed up and two boxes of the same kind of cereal. And again, who orders only two bananas? Lord, have mercy!

Making mistakes is part of life, right? And if it would just stopped there and not swell into a ‘he said, she said’ kind of thing, or a ‘you’re wrong, and I am right sort of thing’, or an out and out opportunity to lie and blame, then making mistakes wouldn’t be such a big deal. Live and learn, right?

But, we being flawed humans and all, we have a hard time with being wrong. It’s like we have this inbred condition that renders us temporarily big, fat liars if we get caught in a mistake. We simply can’t help ourselves.

Just the other day I was talking with someone who glanced at a clock and thought it said it was 7:15. I looked at the clock and saw it was actually 6:45 and told the person so. Instead of admitting he had looked at the clock wrong, he said, “Oh, the time must have went backwards.” Wha-at?

What is the deal with admitting a mistake? Why does that threaten us so much? Why can’t it just be what it is? ‘I made a mistake. I’ll own it.’ Making a mistake does not diminish us as a person, does it? Let me tell you what does diminish us–– all the stupidity that tumbles out of our mouths trying to save face; All the hurt we inflict on others, so we aren’t caught with our pants down. That makes us less. Not our mistakes.

Well, I’m going to stay at this online ordering grocery thing. So far, I have been able to turn actual lemons into lemonade. What else are you going to do when you only wanted two lemons, but you got five. My bad.