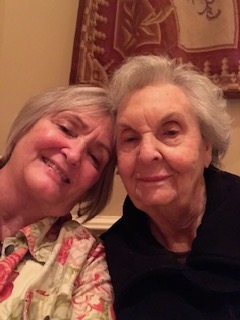 My first ‘people stop’ on my adventure was at my mom’s. She’s 91-years-old, beautiful, sassy and make’s those new fangled ‘helicopter moms’ look like squeaky toys. Nobody hovers, points, oversees, and manages someone else’s life, better than my Mom. I’m sixty-seven-years-old and she still thinks I should cut my bangs and tells me so. But, on the day she is called Home, I will become an orphan, and I will miss her from the deepest depths of who I am, the woman who she prepped, grilled, blessed and sent on her way. No matter how unremarkable I am, when Mom introduces me to all her new independent-living neighbors she somehow convinces them that she raised a genius. I hope God will be ready for her and her opinions and He might as well get a haircut before she shows up or she’ll be relentless.

Tonight, is my second night in a campground. I’m somewhere in Arkansas and found this lovely RV park tucked among tall trees and the warmest bathroom I’ve ever been in. If I cannot get this blasted heater to work, I may sleep there. The temp tonight is somewhere around 48 degrees. When I made my hot tea a little while ago on the propane stove, I coaxed the temp in the TWR (Traveling Writing Room) up to 62. I’m on my third cup.

What have I learned so far on this adventure? Hard to say just yet, but I have felt movement. By that I mean, my experiences thus far have been two-edged. Like the other night freezing and wearing my gloves on my frozen tootsies was kind of awful, yet I also felt gleeful. Weird, huh? And, that gleefulness stuck around, until I got to Mom’s and she sent me back into the bathroom to wash my hands. I just went in there to get Kleenex for Pete’s sake!

Another thing that is happening is that I’m getting like, on-the-job-training. I know nothing about anything mechanical. I remember nothing I learned in physics, or science lab, or even Home Ec. that has prepared me to fix something that breaks. Which is why I believe God made Duct Tape on the Eighth Day, for folks like me. A MacGyver, I’m not. Case in point: I spent an hour this evening, I kid you not, trying to figure out why heat has decided not to come out of my heater. My owner’s manual said I should check the fuses. Okay, the fuse box is built-in the bench seating about an inch off the floor. The two bench seats are about two and a-half feet apart from each other. To get myself on the floor level with the fuse box, I needed knees that bend. I don’t have those kind of knees. My original knee caps have gone to live with Jesus and they were replaced by man-made ‘gadgets’. So, I plopped on the floor, by-passing my knees, not knowing if I would ever be able to ‘unplop’ back upright.

I opened the tiny little cover on the tiny little fuse box with my face about two inches from the tiny little fuses. They looked fine to me. The manual said to flip the tiny little switch a couple of times to jump start the heater. I did that. There was no jumping or starting. So, on my own, I thought maybe I should take each tiny little fuse out, one at a time, and blow the dust off of them and then put them back. The first tiny little fuse I pulled out, I dropped. I dropped it in a tiny little slot that fuses shouldn’t go in. A slot none of my fingers would fit in. The lights in the TWR went out. Pitch black I think they call it. I searched for my flashlight and apparently I didn’t pack one. Lying on my back, I grabbed my iPhone from under the sleeping Atticus, and engaged the flashlight app. Did you know that once the SOS flashing code thingy comes on, it’s almost impossible to get it off? I could, however, plea for help in several different colors. Finally, with a fork, paring knife, yellow paper clip and tweezers, I coaxed the tiny little fuse out of the tiny little s

lot. Yes, it took an hour. No, I still do not have heat. Yes, getting up off the floor without bendable knees in a very tight space was not pretty, but I now know so much more than I knew before. It’s worthless information but, I feel gleeful.